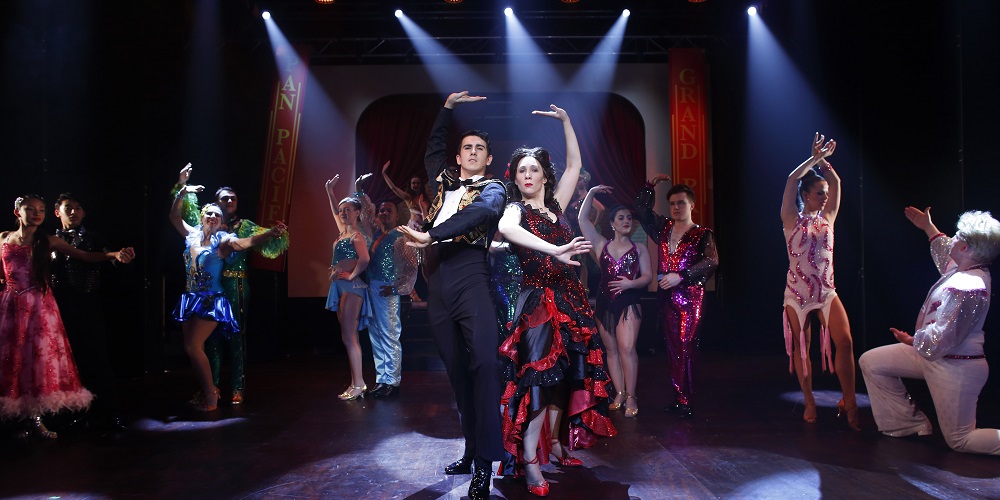 The film didn’t come first. Baz Luhrmann’s charming rebellious-ugly-duckling allegory started life on stage as a play, then became a film. Its transformation into a successful music theatre piece was aided by a patchwork of music, augmented and stitched together by Eddie Perfect.

The film didn’t come first. Baz Luhrmann’s charming rebellious-ugly-duckling allegory started life on stage as a play, then became a film. Its transformation into a successful music theatre piece was aided by a patchwork of music, augmented and stitched together by Eddie Perfect.

This show is about us. We see Australians, using our language, speaking in our accents, and behaving within our cultural values. For this, it is uniquely precious. Not all music theatre is performed with an American accent. It’s good to see Strictly Ballroom being done for all these reasons.

The story is essentially about questioning the need for rigid rules which seem irrelevant, and also about unassuming people being unexpectedly successful by being true to themselves. The two lead roles need both skill and stamina to make this show work. Kurt Benton (playing Scott Hastings) and Kate Harrison (playing Fran) both have sufficient stamina, as well as the dance chops needed to convince us. Benton gets to display his balletic ability as well as a good ballroom discipline. His voice has a very pleasant timbre, and he handles all his sung material well, although he has an odd habit of crescendo/decrescendo on sustained notes. Kate Harrison’s mousy-to-marvellous Fran displays her acting ability. She dances well, and sings with sensitivity, blending well in duets, especially in Magnifico, her duet with her Abuela (Niki Martin). Both Harrison and Benton produce credible, sincere characters with believable dilemmas.

Not so, the more caricatured roles. My guess is that the size and shape of these roles were directorial in origin. Shirley Hastings, golden-boy Scott’s adoring mother, and Ballroom Association President Barry Fife, are both larger than any known life-form. As Shirley, Carolyn Adams’ performance energy is prodigious, and her dance-mum-from-hell looks wonderful. We get it – there’s no need for her character to do so much to contrast with her quiet, subservient husband Doug. President Fife is the possessor of a whining angle-grinder voice; it’s tough on his vocal folds and our ears. There’s no doubting his character’s officiousness, bluster and connivance; Baz Luhrmann’s and Craig Pearce’s book offers Fife a glorious smorgasbord of acting choices. This version of the character has more in common with a pantomime dame than a petty-minded official intent on retaining control.

Lauren Weber, as Liz Holt, the spurned dance partner, has fun spitting extravagant vitriol. Joel Amos, who clearly swigs teeth whitener regularly, creates such an archetypal ballroom character in his portrayal of Ken Railings, that his character beams across the footlights.

Acting honours in this piece go to Angus Smith, as Shirley’s ever-compliant husband. He never over-plays, works collaboratively, retains excellent focus throughout, and becomes the believable heart behind the whole plot. Hot on his heels is Niki Martin, whose Abuela is warm, well-rounded, clearly articulate despite accent, and acted with intelligence and passion. She sings well too. Max Rayner, despite the handicap of a somnolent creature with white fur perched on his head throughout the show, is a splendid acting anchor. He plays dance school proprietor Les Kendall with sharp sincerity, making his character’s problems ours, and building the dramatic needs of the plot.

Amassing a cast of 26, including himself, Matt Byrne has produced, directed and designed this show. His name is ubiquitous, as is his influence. His design is multi-purpose and economic, considering the limited space of the Arts Theatre. However, if his design had been a little less literal and more referential, scene changes could have been less sluggish.

There’s ‘ballroom’ in the title, so dance is a primary element of this piece. The popularity of the film means that audience members have high expectations. Director Byrne, by engaging the operators of the Arthur Murray Dance Centre Adelaide as co-choreographers, ensured that ballroom dance has been taught thoroughly and, in some cases, polished to a gleam. The work of Choreographers Tara Johnston and Thomas Coghlan is evident in the whole ensemble’s dance work. Group ballroom numbers are well-staged and have a tidy finish.

Costumes are, of course, a huge part of ballroom dancing, and the after-five section of Spotlight seems to have been appropriated in order to clothe the cast. For the magnificence of the spectacle, Ann Williams (Costume Designer, Creator and Co-ordinator) and Sue Winston (Wardrobe Supervisor), please take a bow!

And now, a word about the singing. Company choral numbers were a trial, with ragged entries, wayward harmonies, and under-powered, audibly puffed-out singers. The trade is called ‘triple threat’ for a reason. You need to be able to do the acting, the singing and the dancing… frequently simultaneously. It seems that, in comparison to the dance component, singing was sadly under-rehearsed. Those good, hard-working performers on stage simply needed more help with their singing. Neither did it look as if the singing and dancing had been worked together into a theatrical whole. I would be slow to blame excellent Musical Director Jesse Budel for this. His ten-piece band is largely tidy, despite some violin vagaries. Hooray for Corey McNulty on drums – his Latin beats are tasty. Likewise, the unflappable Patrick Maher’s on-stage guitar sequence in the Paso Doble. Budel’s tempi are excellent. Sound balance in the auditorium is still a bit of an issue, but I expect it to be resolved early in the run.

As a joyous fable of the triumph of individual artistry over the dead weight of traditional values, this show is, as ever, an inspiration. More time spent rehearsing the component parts of this complex piece into a dramatically satisfying theatrical whole would have given this ambitious production the polish it deserves.