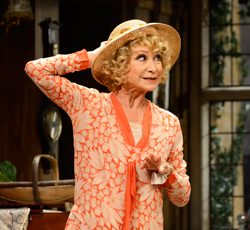 Hay Fever has been a favourite amongst theatregoers since it first dazzled London’s West End in 1925 and is now touring Brisbane, Perth and Adelaide for strictly limited seasons.

Hay Fever has just received five star reviews in England with critics calling Felicity Kendal “tremendous” and “an ideal Judith Bliss” while hailing the show a “comic masterpiece” and “hilarious”.

Kendal stars as matriarch Judith Bliss, a once glittering star of the London stage who is now in early retirement, is still enjoying life – with more than a little high drama. To spice up her weekend, Judith invites a young suitor to join her in the country. However, her egocentric novelist husband and her two eccentric children have had the same idea for themselves and any hope for private flirtation disappears as the family’s guests begin to arrive.

Unconventional, risqué and often downright rude, they are everything a respectable English family should not be. When each member of the family invites a guest to their rural retreat, the unassuming visitors are thrown into a living melodrama. Misjudged meetings, secret seductions and scandalous revelations all run riot at the most outrageous of all house parties during one unforgettable weekend in Berkshire!

One of the UK’s greatest directors of comedy, Lindsay Posner, directs Noël Coward for the first time with this production. Lindsay’s recent West End successes include Noises Off and Abigail’s Party. This production reunites Felicity Kendal with the acclaimed director after their West End triumph in Alan Ayckbourn’s Relatively Speaking in 2013. In September, Lindsay will direct Lindsay Lohan in her West End debut in the Theatre Royal Bath production of Speed the Plow.

Playwright, composer, actor, author, director, producer and master of wit, Noël Coward (1899 – 1973) remains one of the UK’s most distinguished and celebrated icons. Coward had written more than 15 plays by the time he was in his mid-30s and, despite his comparative youth, the first of many Coward biographies had already been published. One of the UK’s most prolific and popular writers, his plays include Fallen Angels, Private Lives, Design for Living, Blithe Spirit, Present Laughter and Relative Values. With the onset of World War II he redefined the spirit of the country in films such as This Happy Breed, In Which We Serve and Brief Encounter. Noël Coward was knighted in 1970.