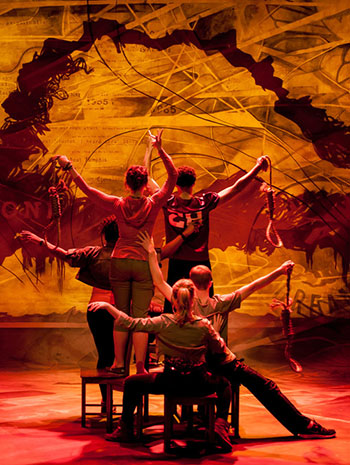 A fusion of movement, dance, music, humour & storytelling, based on the true story of 6 black students charged with the attempted murder of a white student. Based on the true story of six black teenagers charged with the attempted murder of a white student after a schoolyard fight, the group that became known in 2006 as the Jena Six, served to inspire this play written for Penn State School of Theatre.

Six of the school’s finest serve up a mix of movement, dance, music, humour, and fascinating storytelling from the tight, punchy script set in Cedar High, in America’s deep south.

A stark stage complements the themes of bigotry under escalating racial tensions and the attitudes around taking a stand. I lost a little of the dialogue early on, but quickly caught the lightning pace as my ear adjusted to the accents. Directed primarily by Steve Broadnax, Blood at The Root by Dominique Morisseau has the sleek, polished feel of a well-rehearsed world traveller, without the weariness (even though the day I attended, it was “hotter than the devil’s arse”.)

Morisseau’s strong female characters develop credibly with perfect pace. Stori Ayers as Raylynn, Allison Scarlet Jaye as Toria, and Kenzie Ross as Asha, are utterly convincing; their conviction adding inspiration as the tale unfolds. That this show has three (yes, three!) interesting, multi-dimensional and exciting female characters is reason alone to see it.

The gentlemen are no slouches either. Tyler Reilly as Colin scraps stereotyping, Brandon Carter as Justin reveals pigeon-holing struggles, and Christian Thompson as De’Andre shines whilst schooling us on moves, beats, attitudes and injustice.

The Pledge of Allegiance is cited, but it is more than this that will lead audiences to wonder if these Americans consider they are “…one nation under God”. Not unexpectedly, parallels with Australia’s race issues received plenty of post-show scrutiny in the bar.

Speaking of which, if you’re whetting your whistle at the wonderful Holden Street Theatres, look out for the tree by the inside bar, paying particular attention to the “vines” hanging from it. It’s not “Ol’ Faithful”, but it is perhaps, “Ol’ Poignant”.

Blood At the Root by Dominique Morriseau should be compulsory viewing for all students. The ensemble deliver something quite extraordinary; entertainment and intrigue, wrapped triumphantly in hope. Get yourself tickets, ‘cause as Raylynn puts it, “ain’t nothin’ worse than apathy”.