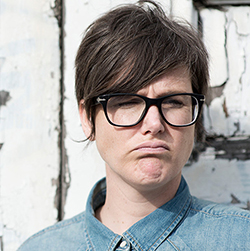 Hannah Gadsby is a big fat lesbian, or so she tells us, which made her dialogue with heckler Simon even funnier when he told her he’s available after the show.

It’s just one example of Gadsby’s comfortable persona on stage and her ability to respond directly to her audience between stories of depression, ADHD, family, kids and crab apples.

Her new show, titled Donkey, has very little to do with the topic other than her ability to prove what an ass some hecklers are and how utterly funny she is.

Gadsby may be best known co-starring alongside fellow comedian Adam Hills on the ABC, or as depressed Hannah on the comedy series Please Like Me. She’s also won a number of awards for her stand up, and no wonder! With an almost shy, relaxed attitude she opens up to reveal mental health issues, relationship traumas and inner dialogues that are equally relatable and surprising.

In the Nova cinema, eye contact is sometimes a problem for those higher up on the raked seating, but it’s easy enough to get lost in her stories and forget that she’s not glancing in your direction. We hang on her every word.

On the cinema screen behind her is a projection of a still montage that is oddly reversed so the book titles are written backward. It never rates a mention, making one wonder if the slide was simply put in the wrong way by mistake!

Seeing Gadsby is no mistake however. Come 7pm, you’ll be Gladys Knight so you can catch that Midnight Train to Georgia with her.

Fringe Review: Jimeoin- Is It?!