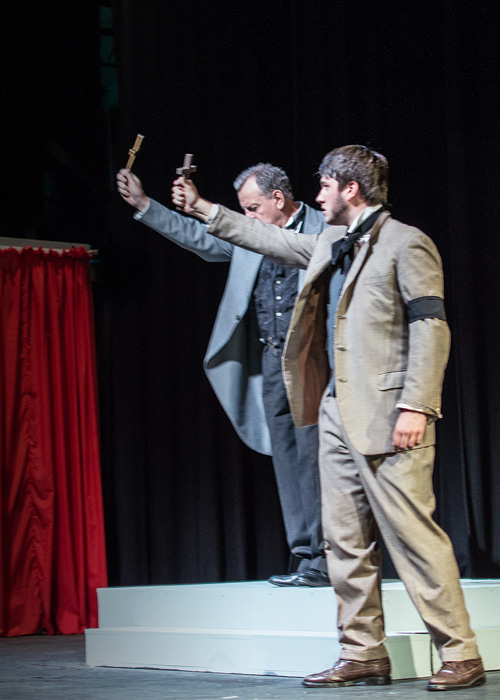 Count Dracula is one of the most famous gothic horror characters, created in 1897 by Irish author Abraham ‘Bram’ Stoker and based on history’s Vlad The Impaler. Apart from Frankenstein’s monster, Count Dracula would have to be the most famous gothic horror character ever. Created in 1897 by Irish author Abraham ‘Bram’ Stoker for his novel Dracula, the character is based on history’s Vlad The Impaler.

The Count has appeared over the years in many forms of media: in films, where, among other things, he met Abbott and Costello, fell in Love At First Bite, and revealed his blood and scars on celluloid; on television in his own show, meeting The Night Stalker, guest starring in an episode of The Simpsons, and as a children’s cartoon favourite, Count Duckula; in comics; in computer games; as a US breakfast cereal (Count Chockula); and in stage plays, including a couple of musicals.

Given so much exposure over the decades, most of us are quite possibly de-sensitised to the original horror and scariness of this ‘sucker’; and when put on stage, especially by amateur theatre companies without the aid of spectacular special effects, the Count tends to become a man in a big black cape with a fetish for necks, and we all know that at the end he is going to cash in his chips and get the stake.

Given an audience’s over familiarity with the subject, one has to question the Adelaide Rep’s wisdom in deciding to stage a production of Dracula; especially this adaptation by Liz Lochhead. There are many better versions, especially the 1977 Broadway version by Hamilton Deane. Lochhead’s script is long, monotonous, repetitive, dotted with unnecessary monologues, extraneous scenes and characters. It does not seem to know which road to go down: it is not sensual; it is not horrific; it is not hugely comedic, except unintentionally in some places; and it does not really succeed as a full blown serious melodrama.

Director Kerrin White does his best to keep the pace up, but in doing so loses a sense of the dramatic; Laraine Wheeler’s lighting design is pedestrian at best; Vinnie Eustace’s set is workable and fairly clever, but becomes a tad confusing at times as to the location it represents (not helped by the script); whilst Hugh Hunkin’s soundscape is extremely atmospheric and verging on brilliant.

Therese Hornby, Charlie Morman, Hannah Nicholson, Elizabeth Olsson and Benjamin Orchard make convincing lunatics, but their multiple appearances start to drive one to madness oneself. As Nurse Grice, Allison Scharber breaks her usual ‘type’ of a well spoken young lady wonderfully, changing her physicality and vocals in particular to present a harridan who manages to provide some well required comic relief. Matt Houston impresses as insect eating, dog’s body (literally), Renfield, even though the script over uses his madness.

Sandy Adams is miscast as Jonathan Harker: he is neither heroic nor upper class enough; but Joshua Coldwell gives his usual excellent performance as Arthur Seward, displaying the right amount of seriousness and authority required, topped off with a beautiful resonance to his voice.

Lani Gerbi (Lucy) and Anna Bampton (Mina) do well as the Westerman sisters. However, Gerbi does not seem fragile enough in Act One, but shows great strength of character in Act Two. Robert Drusetta makes a believable Dracula (is that an oxymoron?), especially with his Transylvanian accent; but it is Brian Knott as Professor Van Helsing, with his experience and expertise in theatre, who is the standout.

While maybe appealing to hardcore vampiric fans, this Dracula is very hard to sink one’s teeth into.