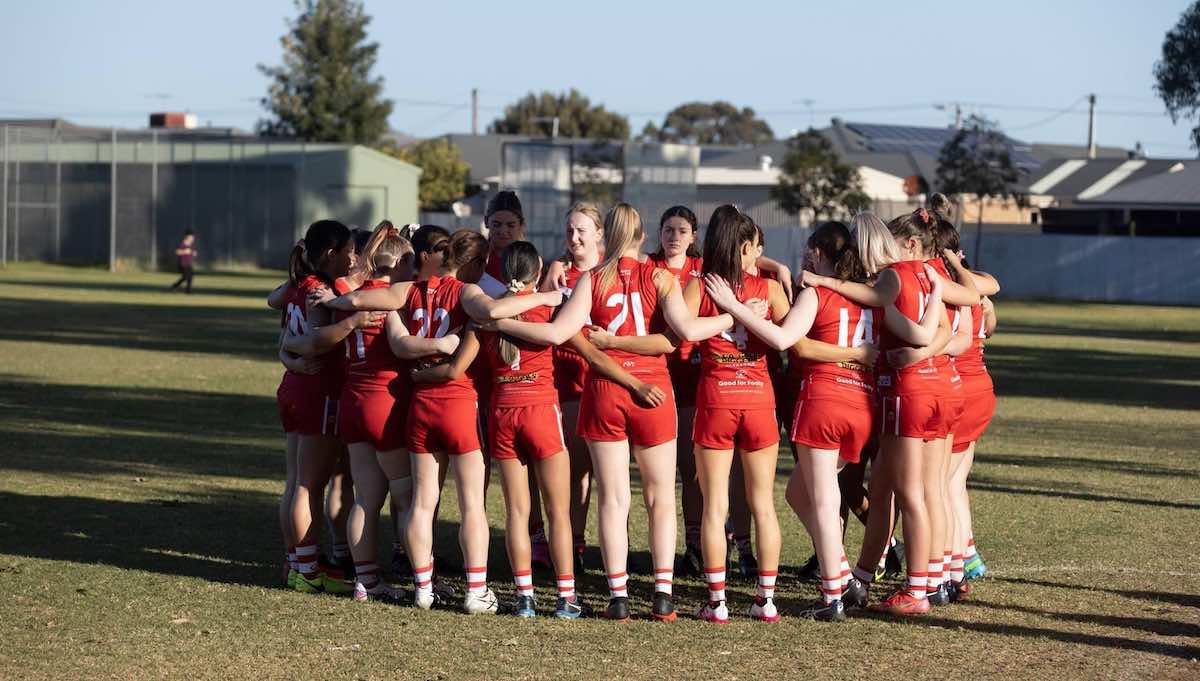 Courtney Paulson has been elected the first female coach at the Woodville South Football Club, leading a team of fairly new to footy female players

Since 1890, the Woodville South Football Club has been fostering athletes to be the best they can be.

In an exciting move for women, Courtney Paulson has been elected the first female coach at the Woodville South Football Club, leading a team of fairly new to footy female players.

Since joining the club two years ago with no real football experience of her own, Courtney says the sport has offered her the most amazing experience.

“I moved to Adelaide three years ago and knew no one, having never played AFL, I joined the club to meet new people and three years later I’ve stuck around and made some of my best friends,” said Courtney.

“I had a serious injury that stopped me from playing early but then went on to volunteering at the club, assisting with both games and the running of the club through the committee. This year I have stepped up to take charge of the women’s team”

Despite being new to AFL Courtney has years of experience coaching other sports at an elite level and says whether it is Cheerleading, Gymnastics or AFL they are ultimately all the same.

“Football doesn’t differ from cheer or gymnastics. All sports rely on teamwork, common goals, skills, technique and structure. They all experience the same morale and sportsmanship. In cheer, gymnastics and football you can have a whole stadium cheering you on full of people who you don’t know, you can tackle someone on-field and come off as best mates.”

Joining a sports club can be great for women’s confidence as well as being a part of a community, says Courtney.

“We have a very welcoming environment for players of all ages and abilities.”

“Sport is a great way to bond with other women of different ages and backgrounds, I have met some of my best friends through the club, I was a bridesmaid in many weddings and even met my partner at the football club, I have my whole family there.”

“It’s such a wonderful welcoming community, we spend weekends going to the beach for walks together and chill out with the girls on Saturday nights.”

“Being led by a female who is successful in your sport when you are an aspiring athlete is empowering,” said Liana.

“I have always thought, AFL has been such a male-dominated sport that girls have been denied in the past, and often clubs are closed-minded to this so it has been amazing to see Woodville South change to allow women to play and lead and take charge. We are individuals who are just as passionate as the guys, we train the same so we deserve the same rights as the guys.”

“Having a coach as powerful, bold and open to a challenge as Courtney has been huge in helping us achieve our goals.”

“A lot of us went into it not playing AFL our whole lives so we are all learning, new players who join the club are not going to be behind, we are all starting together on this journey

“Now one is going to laugh at you if you miss a kick, we are all learning, the whole club is really supportive, by all means, it’s a perfect environment to grow in.”

The club which has offered female football since 2020 has retrained itself in tradition and made a culture shift to make women feel welcome in the male-dominated sport.

“Women are joining the board and being a part of the committee, we are seeing big culture shifts to be inclusive of all genders by using inclusive language and creating space for women’s changing rooms,” said Courtney.

Everyone is welcome to join the Woodville South Football Club and they are always looking for new members.

“The club has been really good at opening up for women’s football, we are always looking for more players as at the end of each year we have many players selected for SANFL, which is a great reason to lose players, but we always want to encourage new people to join our community,” Courtney continued.

“As an adult sport, we also understand people might want to take some time away for holidays or work so we always need more people on hand.”

“We are all about creating a safe, welcoming space for females to try something new and be a part of a family.”